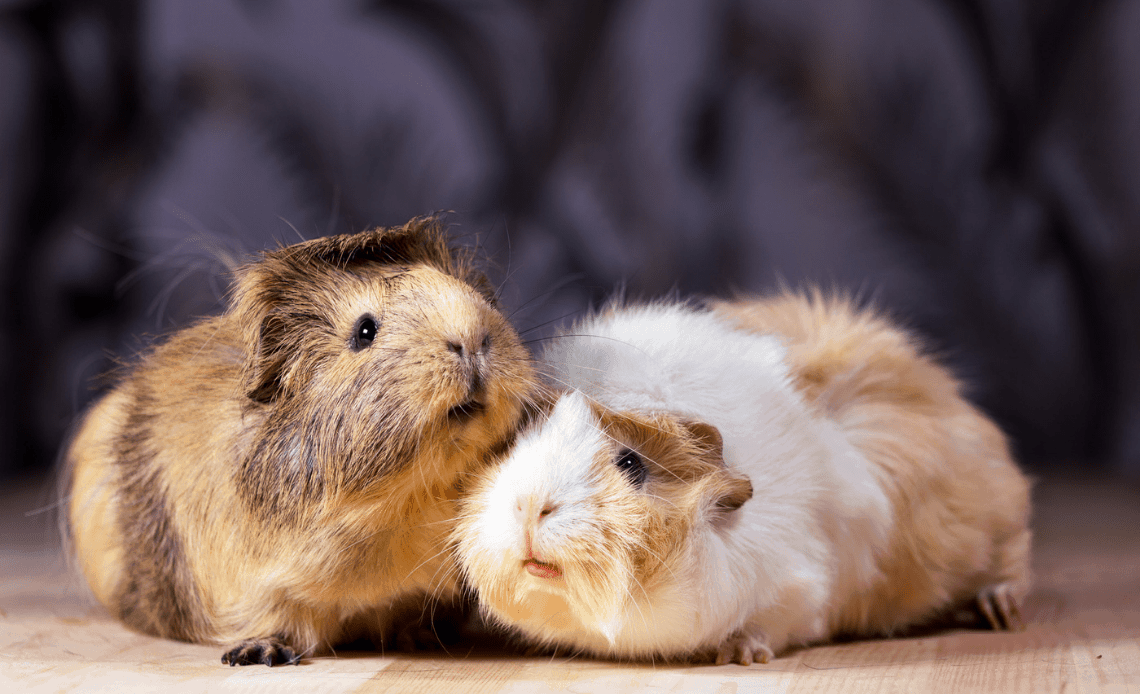 People have been keeping guinea pigs as pets for a long time. In fact, most authorities suspect that they were originally domesticated more than 7,000 years ago!

Over this time, guinea pig breeders have selectively bred their animals to produce lineages that emphasize some traits and de-emphasize others. They’ve also combined different lineages to create entirely new varieties, and they’ve worked to establish genetic mutations that produce desirable characteristics.

Essentially, these efforts have resulted in the creation of several different guinea pig breeds. They all share a number of common traits, but they also differ in key ways – many of which are important for potential cavy owners to consider. 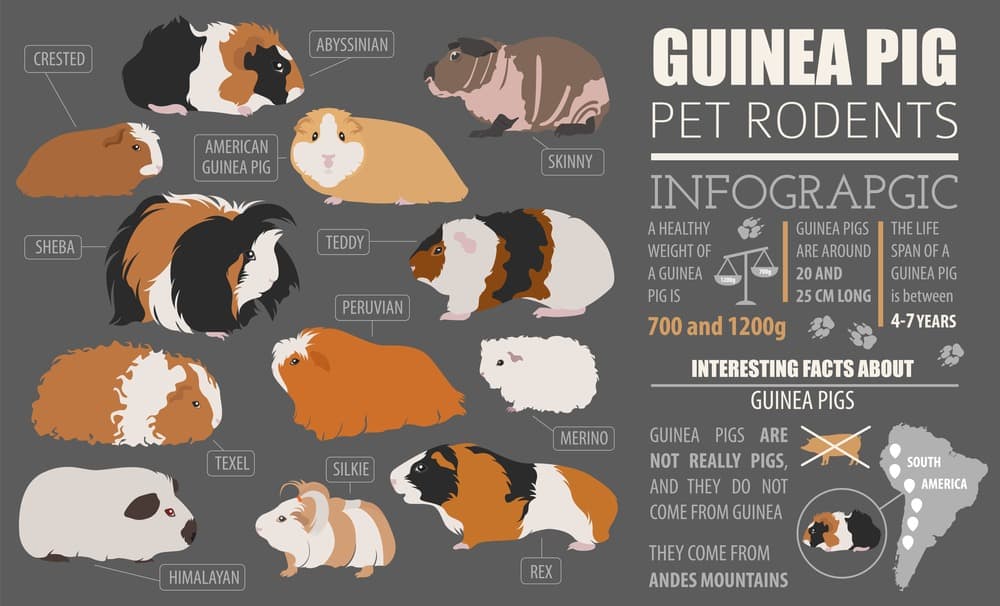 We’ll describe 12 of the most noteworthy guinea pig breeds available below and explain some of their physical and behavioral tendencies. Just be sure to consider the differences carefully, so you can pick the best guinea pig breed for your family. 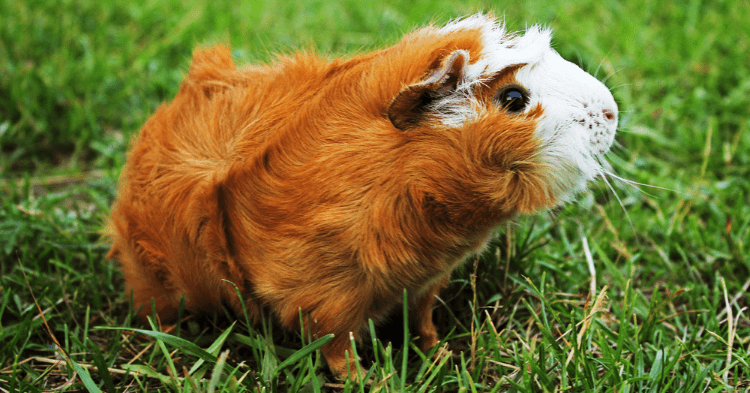 Abyssinian guinea pigs are one of the easiest breeds to recognize, as their bodies are covered in circular tufts of hair called rosettes. Ideally, individuals bear 10 rosettes, located in various places around the body. It’s not entirely clear why Abyssinian guinea pigs were named after an African location (Abyssinia is the name of a historic Ethiopian kingdom), but the earliest records of the breed date back to 16th-century Europe. 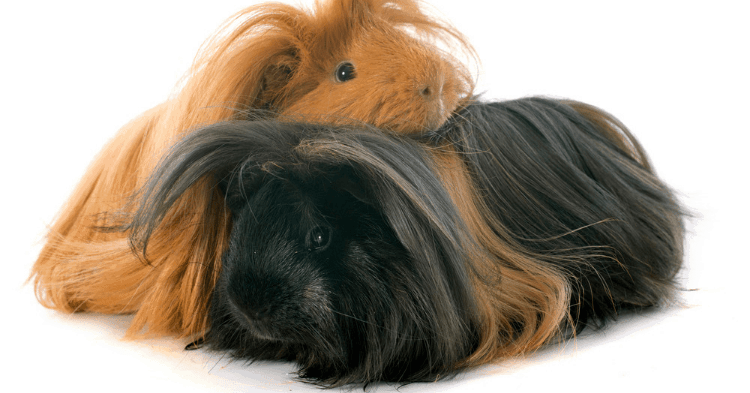 Peruvian guinea pigs have a slightly smaller head than most other cavy breeds, but they’re probably most celebrated for their long, silky hair. They start life with short, relatively typical-length hair and two prominent rosettes near the hips. Over time, the hair grows longer, and a portion of the coat sweeps forward, forming a “forelock.”

The Teddy guinea pig is a popular breed, thanks in part to its short, fuzzy coat. They occur in “harsh” and “plush” varieties, with relatively coarse or smooth hair, respectively. However, they all generally resemble stuffed animals, which explains their name. Teddies bred in the USA typically have long belly hair, while others have relatively uniform hair length.

Teddy guinea pigs are often recommended for children, as they have relatively low-maintenance coats, which don’t require a lot of care.

American guinea pigs are a medium-sized breed, with a wonderful temperament, laid-back personality and a cute, low-maintenance coat. This, combined with the fact that they’re typically very healthy animals, has helped make them the most popular breed in the USA.

American guinea pigs cohabitate well with other cavies, and they usually enjoy lots of interaction with their keeper. Because their coats aren’t particularly long, they don’t have very significant grooming needs – a weekly brushing will usually suffice. 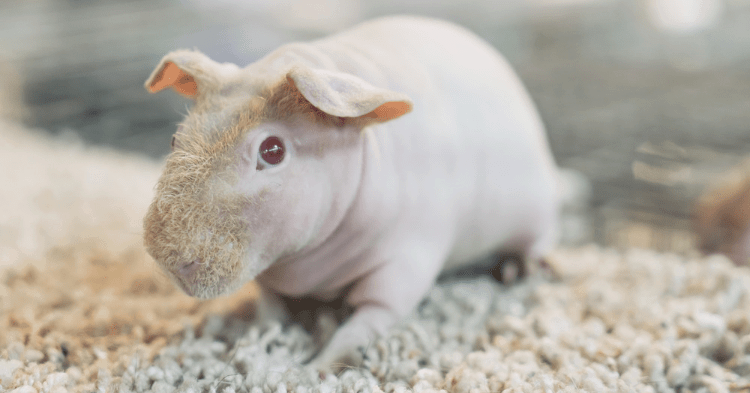 The Skinny guinea pig (or “skinny guinea” as they’re sometimes called), is one of several nearly hairless breeds. These cavies are born almost completely naked, but they typically develop a small amount of hair on their face and feet over time. Their lack of body hair causes a few husbandry challenges, as these guinea pigs are highly susceptible to drafts, strong sunlight, cool temperatures and bacteria. Accordingly, they are not a good choice for first-time cavy keepers.

The Skinny guinea pig breed was created by combining a laboratory breed that possesses a genetic mutation rendering them almost completely hairless with a few more common breeds, including the Teddy guinea pig.

Another nearly hairless cavy breed, the Baldwin is not closely related to the Skinny breed. Baldwins arose spontaneously, from a litter of crested cavy (another guinea pig breed) parents. Another difference between this breed and the Skinny guinea pig is the timing of the hair loss: Baldwins are born with full coats, which they shed gradually, over the course of about one year. They do typically retain a bit of hair on their feet.

Like Skinny guinea pigs and most other hairless breeds, Baldwins are not a good choice for beginners, given their need for more care than other breeds.

Texel guinea pigs are one of the most unusual-looking breeds. They’re typically clad in long, curly locks all over their dorsal surfaces, but the hair around their faces is usually quite short. They also have relatively wide heads, which accentuate their unusual appearance.

Originally developed in the U.K., Texel guinea pigs were originally created by crossing a Silkie guinea pig with a Rex guinea pig. Like most other long-haired breeds, Texel guinea pigs require a lot of grooming and care. Consequently, they’re typically a very poor choice for novice cavy keepers. 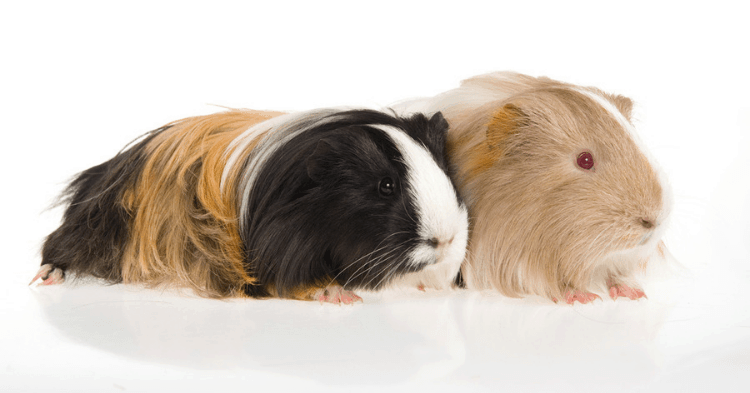 Silkie guinea pigs have long, soft coats, which flow back from the head. When viewed from above, they appear teardrop-shaped. Silkies are often rather shy, but they’re typically docile, which – when combined with their luxurious coats – make them one of the most popular breeds.

However, it is important to think carefully before adding a Silkie to your home. The long coats of Silkies require quite a bit of care and maintenance, including daily brushings.

The Rex guinea pig is a short-haired breed, whose hairs are less than ½-inch long. The entire coat is devoid of guard hairs, but the undercoat sticks straight out, making them appear particularly fuzzy. Rex guinea pigs are also noteworthy for their long, droopy ears, which make them particularly endearing to many cavy enthusiasts.

Rex guinea pigs are generally pretty friendly, affectionate and easy to maintain. They’re also typically hardy, so they are often a good choice for cavy-keeping novices.

The White Crested Guinea Pig is one of the most distinctively marked guinea pig breeds available to modern cavy enthusiasts. They appear almost exactly like American guinea pigs, except that they bear a tuft of hair on their heads that differs in color from the rest of the cavy’s body. Most commonly, White Crested guinea pigs have golden coats and white head tufts, but there are some exceptions.

White Crested guinea pigs are relatively rare, but they can make good pets. Their short- to medium-length hair is easy to maintain, and – although they are often a bit aloof – they are intelligent and quickly learn to tolerate handling and interaction.

The Sheba guinea pig (sometimes called the Sheba Mini Yak) was originally developed in Australia by crossing Abyssinian guinea pigs with Peruvian Wombat-Faced guinea pigs. They have relatively long hair that often bears rosettes, and the hair around their face often appears like “mutton chops.” In some cases, their fur grows long enough to reach the ground, but others never produce such long locks.

The Sheba guinea pig is not recognized by all breed clubs, but this doesn’t really matter for those who simply want a cavy for a pet. They are best suited for more experienced keepers, given their semi-long hair. However, beginners who are willing to provide the coat care they need may find Shebas to make great pets.

The Merino guinea pig is a relatively rare breed. In fact, it isn’t even recognized by many guinea pig breed clubs. Nevertheless, the breed still has plenty of devotees, who love its curly coat and white facial markings.

The Merino guinea pig is widely praised for being intelligent. This makes them one of the best guinea pig breeds for owners who’d like to train their pet to perform tricks. Just be sure that you obtain a very spacious habitat for your pet if you decide a Merino is the breed for you – these are very curious and active cavies, who like to spend lots of time exploring.

Cavies are not only represented by several different breeds, but they also come in myriad colors. Not all breeds are available in all colors; some only come in a single color pattern, while others are available in a broad selection of colors and patterns.

Some of the most noteworthy colors and color patterns of guinea pigs include:

Things to Think About When Picking a Cavy Breed

Because there are pretty significant differences between various cavy breeds, you’ll want to take your time when making a decision and carefully consider your choice. If you pick a cavy breed that is well-suited for you and your family, you’ll likely enjoy caring for your new pet. But on the other hand, if you pick a breed that is not a good fit, you’ll likely regret your choice.

Just be sure to think about the following considerations when making your choice:

One of the most important things to consider when picking out a new guinea pig is the type of coat care your new pet will require. In most cases, breeds with short- to medium-length hair are the easiest to care for, as they usually only require weekly brushings. Conversely, long-haired varieties require extensive coat care and, occasionally, haircuts. Hairless breeds don’t require a lot of care, but they present other challenges, which may make them difficult for novice keepers to care for.

Some guinea pig breeds are typically healthier and less susceptible to illness than others. This isn’t a very big problem for experienced keepers, but if you are new to guinea pigs, you’ll certainly want to pick a breed that usually remains healthy and vigorous.

You need to decide what kind of relationship you want with your cavy, as some are better suited for some types of interaction than others. For example, if you are purchasing the cavy for a young child, you’ll want to select a calm, yet self-assured breed, who won’t become stressed by the kind of handling children are likely to want. But if you are an experienced keeper, who understands how to make a skittish guinea pig feel comfortable, you may want to consider one of the shyer breeds.

If you want to train your guinea pig to do neat tricks, you’ll want to select one of the more intelligent cavy breeds. On the other hand, if you aren’t particularly interested in training your new pet, you will be better served by considering other important characteristics.

Wrapping Up: Consider Your Choice Carefully

As you can see, picking out a new cavy isn’t as simple as many people initially suspect. There are not only a variety of different cavy breeds you can choose from, but there are also a number of coat colors and patterns available to you. Don’t let all of the options available to you become overwhelming – simply take your time, review the characteristics of each breed carefully, and try to pick the best pet for you and your family.