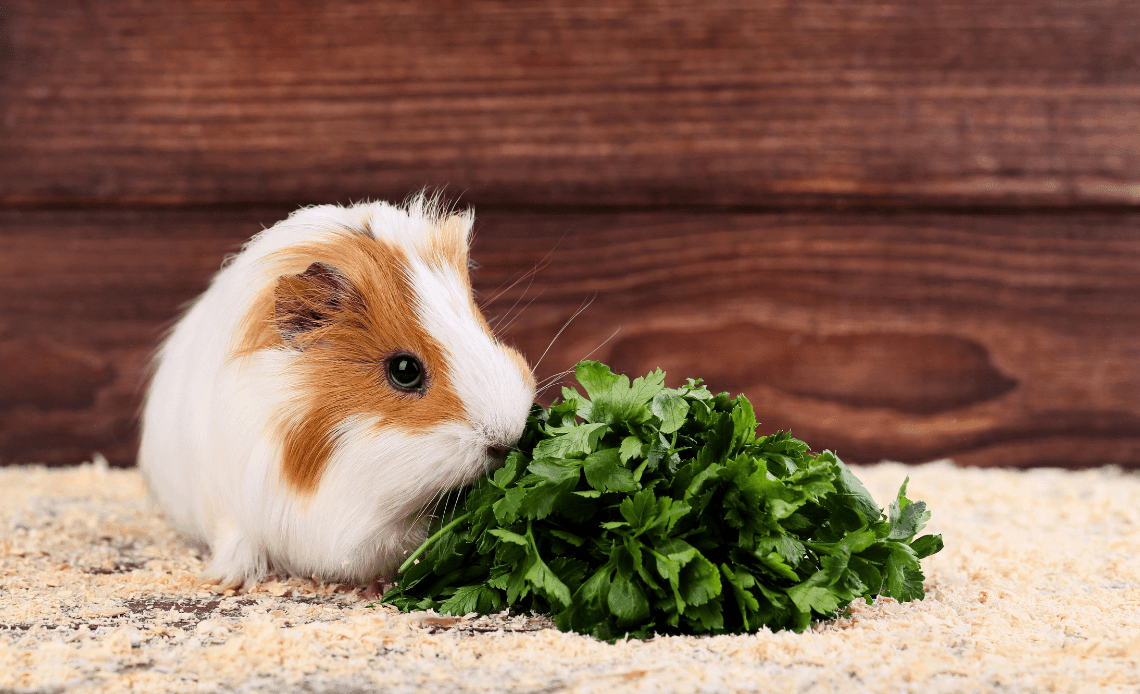 Guinea pigs are fun pets to care for and maintain. Part of the reason they’re fun to care for is that — unlike some other animals, who should only be fed commercially produced foods — you can supplement your guinea pig’s diet with a variety of fresh fruits and vegetables. In fact, it is wise to do so, as it’ll help ensure they receive all of the vitamins and minerals they need to remain healthy.

What Are Herbs, Anyway?

Botanically speaking, an herb is simply a plant that does not produce persistent, woody tissue. Instead, herbs die back at the end of the growing season. There is usually little above-ground growth left once winter arrives. This distinguishes herbs from plants that remain intact through the winter.

In this sense, the term “herb” could apply to everything from basil to lettuce to spinach.

However, there is another definition for the term, which makes more sense for guinea pig owners. The second definition for herbs, according to Merriam-Webster, is a plant or plant part that’s valued for its medicinal, savory or aromatic qualities.

This definition more accurately describes the herbs some owners are interested in giving to their guinea pig, and it’s the one we’ll be using moving forward.

There are a few exceptions, but guinea pigs can safely eat many herbs. Most herbs should only be offered in moderation and as part of a well-rounded diet primarily comprised of hay, pellets, fresh fruits and vegetables.

It’s also important to point out that guinea pigs are all individuals, with varying tastes. Some may enjoy eating herbs more than others, and they’ll all exhibit individual preferences regarding the herbs they enjoy most. So, be sure to experiment with the various herbs listed below to find the ones your pet likes most.

Parsley is a good herb to feed your guinea pig on an occasional basis. Most guinea pigs seem to enjoy the taste of parsley and the plant is full of Vitamin C, so it is more valuable than many other commonly fed herbs. However, parsley is high in Calcium and oxalic acid, both of which can contribute to the formation of bladder and kidney stones.

Chives are not safe for guinea pigs. In fact, they can be quite dangerous for your pet. Chives – as well as onions, garlic and shallots – contain disulfides. Disulfides are a type of sulfur-containing molecule that can damage your pet’s red blood cells.

Unfortunately, the damage caused by chives and related herbs can take some time to show up. This has prevented many owners from realizing what caused their pet’s demise.

Cilantro (sometimes called Italian parsley or coriander) is acceptable to feed guinea pigs as an occasional treat. However, because cilantro is high in calcium and oxalic acid, you must not feed it in excess. Cilantro has a pretty strong odor, which some guinea pigs find off-putting, so don’t be surprised if your pet doesn’t eat very much.

Some guinea pigs appear to enjoy the taste of thyme, and it is safe for them to eat in small amounts. Thyme is a pretty good source of Vitamin C, but it is also very rich in calcium. This means that you must limit the amount your offer your pet.

Mint is safe to give guinea pigs. However, because it is packed with calcium and contains only modest amounts of Vitamin C, you shouldn’t feed it to your pet very often. A few small leaves once or twice a week should represent the maximum. 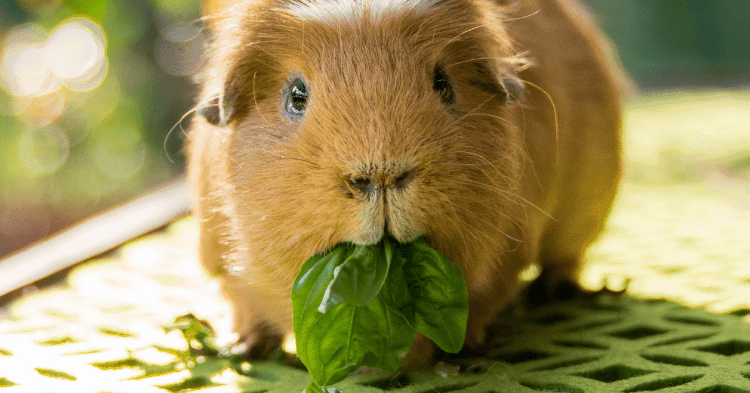 Basil is generally recognized as safe for guinea pigs. You can feed your pet all above-ground portions of the herb, including the stems. However, basil does have quite a bit of calcium, yet it doesn’t have very much Vitamin C, so it shouldn’t comprise a large percentage of your pet’s diet.

There isn’t a broad consensus regarding the safety of rosemary for guinea pigs. There isn’t any data that suggests their specifically unhealthy or toxic for guinea pigs, but very few reliable sources classify it as safe. Accordingly, this is an herb that you should simply avoid feeding your pet.

Oregano is safe for guinea pigs, but it must be given in very small amounts, as it has an extraordinary amount of calcium. Excess calcium can lead to bladder and kidney stones, which are not only painful, but they may also necessitate expensive veterinary care.

Additionally, oregano doesn’t appear to appeal to many guinea pigs, so your pet may not like it anyway. If you choose to feed oregano to your pet, only offer a few small leaves per week.

Arugula is safe for guinea pigs, and many seem to enjoy the taste. However, arugula doesn’t contain very much Vitamin C and it is full of calcium, so it should not form a regular part of your pet’s diet. You can feed your guinea pig a few arugula leaves once or twice each week.

It isn’t entirely clear whether or not fennel is safe for guinea pigs. It doesn’t appear to be toxic, but there isn’t a lot of information available regarding the leaves and stems (which are the parts that would appeal to guinea pigs). Accordingly, it is wisest to simply avoid giving fennel to your guinea pig – especially considering that there are so many safe alternatives available.

Endive is another safe herb for guinea pigs, and most guinea pigs appear to enjoy the way it tastes. You can offer it to your pet once or twice per week, but don’t overdo it: Endive contains quite a bit of calcium and very little Vitamin C.

Dill has an incredible amount of Calcium, so it shouldn’t be fed in excess, but it is a safe food for guinea pigs. Just be sure to feed it to your pet sparingly. Not all guinea pigs like dill, so don’t be surprised if your pet doesn’t eat very much.

Lavender is not a good herb to feed your guinea pig on a regular basis, as it contains a lot of calcium. However, it is not toxic, and your guinea pig may enjoy eating some lavender leaves from time to time.

It isn’t clear whether or not sage is safe for guinea pigs. Consequently, it is wise to simply avoid giving it to your pet. Sage doesn’t offer any particularly significant nutritional value, so your pet won’t be missing out on anything. Additionally, because it is so aromatic, it’s unlikely that your pet would enjoy it very much.

Which Herbs Are Dangerous for Guinea Pigs?

While many herbs are safe for guinea pigs, there are others you’ll need to avoid completely. Some simply have a poor nutritional profile, while others are high in calcium, oxalic acid or other things that may lead to long-term health problems. Still others are actually toxic.

Although not exhaustive, the list below contains a few of the herbs you’ll want to avoid feeding your guinea pig.

Make Sure You Prepare Herbs Properly

In addition to avoiding toxic or harmful herbs to your guinea pig, you must also take care to purchase and prepare them in the proper way. Among other things, this means doing the following:

Herbs can make a valuable component of your guinea pig’s diet. Most should not be fed in excess, but many make great treats offered on a once- or twice-per-week basis. Just be sure to review the information about the herbs listed above, so that you don’t accidentally feed your pet herbs that may be dangerous.