Why Do Guinea Pigs Fight & What Should I Do? 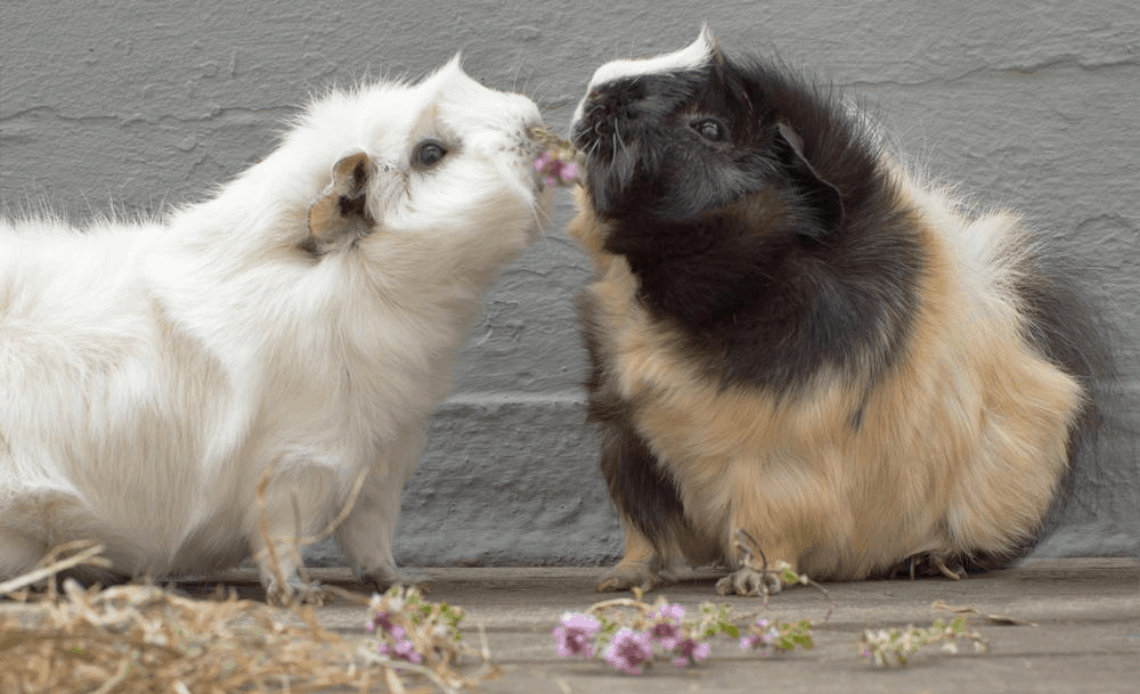 Guinea pigs are social creatures and generally prefer company to being alone. Unfortunately, two or more cavies sharing a cage don’t always get on like a house on fire, and this can sometimes lead to guinea pig fights.

But why do guinea pigs fight, and what can you do about it?

There are many reasons why two cavies may come to blows, including to establish dominance, improper pairing, or if they’re kept in too small a cage. Some guinea pigs will also act out if they’re in pain due to an illness or injury. It’s important to recognize the signs that a fight is about to break out and be ready to step in and separate the cavies if necessary.

Do Guinea Pigs Fight With Each Other?

Yes, just like humans and many different animal species, guinea pigs do fight with each other.

But fights don’t break out because guinea pigs prefer to live a solitary life. In fact, the opposite is true, as these cute little furballs are happiest when they can share their cage with another cavy.

Despite their extremely social nature, guinea pigs do fight. And as any owner who has witnessed a scrap between two cavies will tell you, it can actually get quite nasty and violent.

Many guinea pig fights start out innocently enough. A common trigger point is when two cavies are trying to assert dominance to establish a social hierarchy. This involves a fair bit of posturing — including things like chasing, butt dragging, snorting and teeth chattering — before one of the piggies will usually back down.

But if neither guinea pig is willing to take a backward step, the situation can quickly escalate to lunging, biting, scratching and a high level of aggression.

Is It Normal for My Guinea Pigs to Fight?

The answer to this question is yes and no. Fighting is normal insofar as it is a common behavior for guinea pigs in some situations. For example, two males will fight over a female, while a dominant guinea pig will also try to exert their authority over a submissive cavy.

But fighting between guinea pigs that have been properly paired based on their sex and personality is rare. So if your cavies start going toe to toe, it could be a sign of a deeper problem — for example, one guinea pig might be in pain from an undetected injury, and this is causing them to be angry and irritable.

It’s also important to point out that some behaviors that may look like fighting to humans are actually normal dominance behaviors. Some of the posturings that go on when two cavies try to assert their dominance seems quite aggressive. Therefore, it’s important to recognize the difference between normal bonding behavior and a full-blown fight.

How Do I Know If My Guinea Pigs Are Fighting or Playing?

It’s usually pretty easy to tell when guinea pigs are playing instead of fighting. That’s largely down to some of our cavies’ most adorable traits.

Quite simply, guinea pigs that are playing happily will display plenty of telltale signs that indicate exactly how they’re feeling. For example, a happy guinea pig might squeal, purr, or hop up and down to let you know that everything is wonderful. Even behaviors like chasing and humping are considered perfectly normal and nothing to worry about.

The good news is that it’s generally easy to tell the difference between these playful behaviors and a full-on fight. Guinea pig fights can be violent affairs full of overt aggression, lunging and biting. And this can lead to injuries, cuts and blood if you don’t intervene.

Why Are My Guinea Pigs Fighting?

There are several reasons why guinea pigs fight. Let’s take a look at the most common reasons why your cavies might come to blows.

As we mentioned above, it’s perfectly normal for one male guinea pig to try and assert their dominance over another. This can include behaviors like:

In many cases, one of the cavies will back down and act submissively. But if neither cavy is willing to relinquish the alpha role, this situation can soon deteriorate into a fight.

Guinea pig fights can also occur when a cavy is in pain. If your pet is sore or uncomfortable due to an injury or illness, they may become irritable and lash out.

If you notice behavior that’s out of character for your cavy, this could be a sign of an underlying health problem. You can check them for any obvious signs of illness or injury yourself, but they may need to be checked by a vet to get to the bottom of the problem.

As you probably know, the right pairing is crucial to ensuring your cavies are happy housemates. There are two main factors to consider when matching up guinea pigs:

Do you get cranky and irritable when you’re bored? Well, it’s often the same for guinea pigs.

Regular mental stimulation and exercise are essential for your furry friend’s health and happiness. If they don’t get enough of either of these, they may pick a fight with one of their cage mates.

Happily, boredom is a simple problem to solve. Providing chew toys, ramps, tunnels, hiding places and other items that encourage interactive play can go a long way to ensuring happy and tired cavies. Check out 10 Fun Toys Your Guinea Pig Will Love (2020 Updated)

Letting your guinea pig out of the cage to explore — provided you’ve cavy-proofed the room to make sure it’s completely safe — is also a great boredom buster.

Not Enough Space or Food

You don’t have to be a pet expert to work out that cramming multiple cavies into a cramped cage will only lead to problems. While cavies are extremely social creatures, that doesn’t mean they want to be right on top of one another 24/7.

To stay happy and healthy, guinea pigs need room to move, to roam on their own, and to hide away when they need to retreat to a safe and quiet place. A lack of space and privacy can soon lead to fights between guinea pigs, so make sure your cage setup is designed to cater for the number of cavies you have.

Finally, make sure there’s always plenty of food for all of your cavies. If food is scarce, guinea pigs may fight to claim their share.

What Should I Do If My Guinea Pigs Fight?

Sometimes guinea pig fights are brief and will be over before you know it with no harm done. But when two cavies are ready for a serious fight, you may need to step in to prevent one or both of them getting injured.

Don’t go in bare-handed — wear thick gloves, oven mitts or even a towel over your hands to minimize the risk of injury. You may need to throw a towel over one or both of the cavies to help put a stop to the fight.

The key is to separate the guinea pigs then until they have a chance to calm down. If you’ve got a spare cage or enclosure, this will do nicely. And if you can move one of the animals into a separate room, do that as well.

Then it’s time to check for injuries and make sure each of your pets is physically OK, before working out how you can encourage them to get along.

What you do next will depend on why your guinea pigs are fighting.

You may need to invest in a larger cage or more chew toys so your cavies will go back to being happy housemates, or one of your cavies may be acting out due to an injury that needs to be attended to by a vet.

But if your cavies simply aren’t a good match in terms of personality, you may need to look into rehoming one of your furry friends.

Can Guinea Pigs Kill Each Other?

While rare, it is possible for a larger guinea pig to seriously injure or kill a smaller cavy. That’s why it’s important to take care when introducing two cavies to one another, to provide plenty of food and toys for each of your pets, and to carefully introduce your pets to each other.

Is It Normal for Guinea Pigs to Chase Each Other?

Yes. Chasing can be a normal part of playing and asserting dominance for guinea pigs. However, if this behavior escalates into aggression and violence, it can then become a problem.

Can Male Guinea Pigs Live Together, or Will They Fight?

Yes, male guinea pigs can happily live together — in fact, same-sex pairings are recommended to reduce the risk of fighting. However, if you put two males and a female in a cage together, it’s common for the males to fight for the female’s attention.

My Guinea Pigs Keep Fighting. Would It Be Better for Them to Live Alone?

No. Guinea pigs are social creatures and do best when they have another cavy to play and interact with. In some cases, you may be able to remove the “trigger” that causes your pets to fight. If this isn’t possible and your cavies simply aren’t a good match for one another, that doesn’t mean they can’t live happily with another cavy that has a suitable personality.

There are plenty of reasons guinea pigs fight. However, by carefully pairing cavies and making sure they have enough space, toys and food, you can remove many common triggers. It’s also important that you recognize when cavies are playing or displaying normal dominance behavior, and when you need to step in to separate your fighting pets.